Yes, I finally got a Bike day before yesterday, a brand new LML Graptor. Its a 5 gear sleek bike with a 150CC engine that churns out 13.5BHP with fuel tank capacity of 17Litres & a max speed of 110KMPH. Quite a lot for me, as driving at more than 40KMPH would mean risking my bike & life as well increasing the possibility of getting a ticket. 😉 The legal limit here in New Delhi is 40KMPH for light motor vehicles. 😀

Anyway, this 1980MM long & 136KG heavy machine is sure sexy looking, as you can see it yourself. 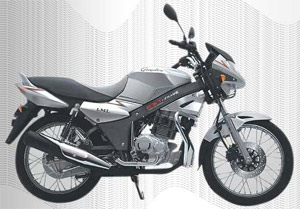 I got it in maroon colour. A pic will follow soon(maybe). 😀 Right now this is an edited(size & dimension wise) version of the bike from the LML Website.

Its been more than 5 years since I last rode a bike myself, so I’ve almost forgotten what its like driving one. And the gear system in this one isn’t helpful either. The last I drove a bike, the gears were 1 up & 3 down, but this bike has them as 1 down & 4 up. So the process of gear shifting is reversed. 😕 I took it out for a spin an hour ago to fill the tank(damn dealer filled only half litre & half of that was spent when the delivery boy left the bike at my home) & it was somewhat difficult shifting gears. 🙁 And I almost drove it in the wall. 😯 Luckily I braked instantly to avoid any crash. My mom would’ve killed me if anything else had happened, its just a 2 days old bike & she wasn’t keen on me having a bike & she strongly opposed it. 😀

But I got it & now she worries whether I’ll drive safely or not. 😀
Yes Mom, I’ll drive it safely, I don’t want to end up in the hospital. 😉