Ok, first of all, the Conference was organised at Hyatt Regency, New Delhi. Couldn’t have picked a better place, the food there is simply awesome. 😉
Here’s the hotel photograph from the hotel’s website. 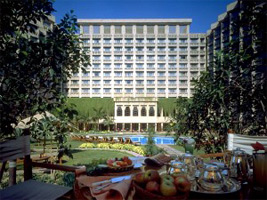 Looks cool, huh? 😀 The conference started at 9am IST & finished for the day at around 6pm IST. So a pretty long day, no? 😉

Ok, lets get on the cooler stuff. The hotel was impressive & the lunch and refreshments were impressive. 😉

The presentations were impressive too. First we had, Greg Rewis, Chief Web Technologies Evangelist at Macromedia.
In the first session, he told us why Rich Interactive Experience of users is essential on our website, simply because it pleases the user & he comes back, again & again. He described how we can enhance user experience with, guess what, Flash, obviously. 😀 Ok, I don’t deny that, Flash, used correctly, can definitely improve user experience & deploying that is easy & its consistent across platforms & browsers, in comparison to other ways of doing it, like through DHTML. Had me convinced on that, no doubt about it. 😀

In the next session, he demonstrated why we should use more actionscript as much as possible, the benefits of it & the power of actionscript 2.0, it leads in seamless animation/working of the movie, results in lighter file sizes, & is simply cool. 😀 Ofcourse, this was rather irrelevant to me atleast as I already know that, agree with that & use it as often as I can. This much he conceeded that basically this session is for designers & managers to show them the wonders of actionscript 2.0 😉

Continuing in the next session, he told us why we should use Flash Video. Simply because its cool, easy to deploy & access & has much high quality than Real or Quicktime or Windows videos with quite low file sizes. He demonstrated that by showing videos in different formats along with the Flash Video Format(.flv) & gave us the real-world example of c|net using Flash Video on their homepage. He said that they first went with Real Video but discovering the fact that not everyone was able to access the videos, they switched to the Flash Video, simply because Flash Player is present on almost every browser & that’s all required to view Flash Video. Besides the quality is good at low file sizes.

In the fourth session after lunch, he came to the cool stuff that I was waiting for. A peek at the Flash Player 8 codenamed Maelstrom, beta as he called it. Yes, he demonstrated a beta version of Flash Player 8 & told us about the cool features that will be there in it. Ok, you probably know about them, but I’ll tell you anyway.

One of the cool features(coolest I think) will be Bitmap Caching. You must’ve experienced that with complex animations sometimes, the animation seems to go out of sync & becomes sort of sluggish. With Bitmap Caching, the player can cache the positioning of pixels of movieclip(s) & won’t have to re-calculate them when in a loop animation, so they’ll be rendered more quickly & smoothly, without any sluggishness. He demonstrated 2 samples, one without Bitmap Caching & other with Bitmap Caching. The latter was really cool & smooth. 😉 The Bitmap Caching can be enabled easily with actionscript, its obviously not enabled by default, “you surely don’t want to cache everything“, was the reply that he gave me. 😀 Another feature that it’ll have is Advanced Gradients. It’ll allow designers to have really cool gradients in their movies & interfaces, something not possible currently. Then it’ll have Graphic Filters like drop-shadows, glow effects, colour matrix, which can be applied & animated in sync with the objects with a few lines of actionscript. One of the more cool feature for those who use videos in their Flash movies will be enhanced videos. The codec of the Flash Video will be new, enabling much higher quality at the same file size as of now. And alpha channels will be supported in the video, meaning that you can have much more control over them & can actually have interactive videos. At first I didn’t understand by what he meant, but then he demonstrated it by showing a sample flash file, in which a girl walked looked at a painting & then he changed it to a mall. Looked pretty neat!! 😀

I asked him that there was a piece in news somewhere on the conference that they had in Japan late last year & where they showcased Flash Player 8. There was something about increased performance in the rendering engine & I asked him whether it was Bitmap Caching or there were some other enhancements to the Player. He told me that there were slight improvements to the rendering engine but not a lot, so the big thing will be Bitmap Caching.

Well, that was all about his presentations, & I’d say, I liked that guy, really good at giving presentations & explaining things.

Next we had Chak Ming Fai, the Server Product Manager for South Asia at Macromedia. In the pre-lunch session, he demonstrated the ease of use in deploying Flash Applications with Dynamic Data that’s coming from either an XML Source, or a Web Service or through Flash Remoting. That was pretty cool I’d say, makes me itching to go & try out a few things, & mind you, it does looked too easy to be true & I don’t doubt it. 😀

After lunch, in the 6th session, Chak continued on with displaying the ease of use & power of ColdFusionMX 7. Told us about the architecture & how ColdFusionMX is based upon J2EE architecture. I asked him why they didn’t choose the .NET architecture for it instead. Actually I asked Greg about this & he said that though there maybe some reasons for that, he don’t know them. Chak came to this question all himself saying that someone asked that & I ofcourse acknowledged asking that. So he told that when they started re-writing ColdFusion back in 2001, they wanted something cross-platform that can be deployed on Linux, Mac, Solaris etc. apart from Microsoft Windows. And that’s not possible with .NET as you are bound with Microsoft Windows if you use .NET. I asked him whether he’s unaware of the Mono Project which makes possible the deployment of .NET on Linux & Mac besides Windows. And his answer was “there wasn’t any Mono in 2001, was there?”. Yes, I agree, Mono wasn’t there in 2001. Besides he said that they are not just targetting Linux & Mac, but also Solaris, HP-UX, IBM AIX & so J2EE was more appropriate choice. 😀

Next we had James Talbot, Chief Master Instructor at Macromedia, for the 7th, 8th & 9th(final) Session. He raced us through to migrating the traditional client & server applications to Rich Internet Applications, by way of using Flex, & then using ActionScript 2 with Flex & Flash, to have really cool Flash Interfaces with just a few lines of code in Flex.

The day ended with a Lucky Draw, where a lucky guy won a copy of Macromedia StudioMX 2004 worth atleast US$899. 😀
Wish it had been me, but unfortunately I didn’t win anything, hopefully will be lucky tomorrow. 😉