Yes, the Indian arm of eBay, Baazee.com really SUCKS!! 👿 They are hand in hand with fraudsters selling on their portal & to deceive buyers, they claim to have a Buyer Protection Program which they say is to protect buyers from fraudsters. 🙄

On 14th Feb. 2005, I placed a bid on an auction at Baazee for a Nokia Handsfree. Below is the picture of the product on auction that was displayed by the seller giftsindia

Now I receive a notice that I’ve won the auction, so on 22nd Feb. 2005, I pay for the winning bid plus the shipping charges online. I get a confirmation of payment from the seller & that’s it. No response as to shipment for 2 days. I call up the seller & then they ask for my mobile’s model number. I tell them & they say the product will be shipped that day or next day. No problem so far.
I get the handfree by courier on 25th Feb. 2005 but now the things start getting bad.

When I opened the package, I saw that what I’ve got is an inferior quality 3rd class product that’s peddled on the streets here, not the Boomtype Handsfree of Nokia that was displayed & auctioned. Here’s the handfree that I got. 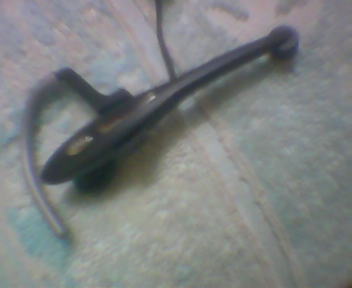 A whole lot of bloody difference between what was auctioned & what was shipped. I immediately called the seller that I’ve not got the same product as what they auctioned & they said that its not possible that I got wrong product. I snapped these two photos from my mobile & eMailed them. Still no reply. I called them again next day & they said that they’ll look into it. Next I get an eMail from them saying that there’s only a minor difference & I shouldn’t be fussing about it.

What the hell, I told them. That’s not a minor difference, that’s a major difference. But the bloody seller is not having any, he kept on repeating that “its only a minor difference“. Then they say that they’ll refund me if I ship the product back to them, like I’m fool enough to be taken for a ride again, why should I believe them? I refused to the offer, saying that I want a replacement, not a refund. They say that its not possible, ofcourse its not possible as the thing they auctioned costs more than 5 times of the winning bid. So I do the next best thing, I threaten them with lodging a complaint of fraud with Baazee against them. I get the final reply from the seller saying that these imported items are changing from time to time & pursuing the matter any further won’t be good for either me or them. The images displayed are only indicative & doesn’t represent the actual product.

What the hell, imported items, who does he think he’s fooling? I probably know more about these items than he does. He only knows the place from where he gets it, while I know where they are manufactured. They are peddled on the streets of markets here, you can get them everywhere, for half the price of what I paid in the auction. And what’s this about indicative images? He’s auctioning something, he’s not giving an ad of his merchandise. So the image has to be that of product itself, b’coz the bidders don’t have anything else to judge the product. And besides, he didn’t mention that the image is only indicative.

So what next? I filed a complaint with Baazee & I received a message that they’ll give the seller 7 days to prove his case else they’ll take action. But after 15 days & not getting any reply, I filed the complaint again. Still no reply after a week & I contacted Baazee. After 2-3 days, I got an eMail from their support that I should file a complaint for the matter. I told them to follow up my previous complaints but they say that there are no previous complaints from me. 😕

What the f**k!! :curse: I file the complaint again & replied back to support yesterday that I’ve filed the complaint & they should now follow it. What’s even ironic is that the seller has eMailed me, asking for a positive rating as they’ve already rated me positively for prompt payment. Sure, why not? 🙄 I made the prompt payment that pleased you but you haven’t done anything to pleased me!! Instead you’ve cheated me & now you expect prompt payment!! 🙄 If I have my way, I’d strangle the bastard!! 👿

Viewing the past sales of this seller, I wonder why they don’t accept the Cash On Delivery for any of their sales? Simply because the people won’t pay for the product when they see that its not the same product which they bought.

Its one opinion that I’ve made, its a fraudster’s world out in marketplaces like Baazee, when they say cheap products, they mean it, yes they are CHEAP themselves too. And I’m not gonna buy anything from Baazee again & if I do buy anything there, I’m gonna use a Credit Card, so I can chargeback incase I’m deceived, of which there’s a 90% chance as most of the sellers out there are frauds.

The online shopping scene here in India is really pathetic. People think that its a good way of deceiving & cheating buyers. That’s why most people still won’t bother shopping online, they prefer to walk into a shop & see the product themselves before paying for it. And who is to blame for the situation? First & formost, the law, yes, the IT laws are pretty loose out here & its people like Baazee who facilitate frauds to be pulled off, they are the beehives of fraudsters. As long as they get the money, they are not bothered whether the seller cheated the buyer or not, & they have a false Buyer Protection Program, just to deceive people into believing in them. 👿